Which features are chosen by topologies

When I have two files loaded in GPlates with topological boundaries and features it often shows the topologies of interest incomplete. When I close the file (the one which is not of interest), it shows correctly.

It sounds like you have multiple features with the same feature ID.

This creates a problem for topologies because they use feature IDs to find the regular features. So if GPlates finds more than one regular feature with the same feature ID then it cannot know which one to use, so it uses neither to make it obvious there’s a problem (eg, no topologies visible). You can see this if you load up the same topology files twice (eg, from the sample data) - all of a sudden all the topologies disappear.

In your case it sounds like you are loading existing features into pyGPlates, modifying them and saving them out. Then, in GPlates, you’re loading both the original files and the modified files, thus the duplicated feature IDs. You can avoid the duplication by cloning the features in pyGPlates before modifying them. The cloning ensures they get a new feature ID. Semantically you’re basically saying that you are creating a copy of the features and then modifying the copy. Rather than loading two different versions of the same feature, which contradict each other. It’s an easy mistake to make, and a relatively subtle point, but that’s the essential jist of the problem.

Another way around the problem, in GPlates, is to use the Topological sections input (see image below) to restrict the search for regular features used by that topology layer (when none specified it defaults to a global search, ie, searches all loaded features). In your case you’d specify either the original or the modified file (but not both)… 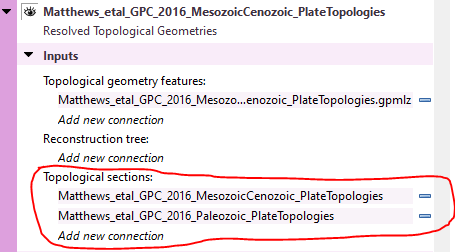 Note that you usually specify the green layers there, since you’re restricting your search to some of the green layers (as opposed to all of them). But be aware that if you have topological line features (ie, different than regular static line features) then these are in purple (topology) layers, not green (regular) layers. So if these topological lines are used by dynamic polygons or deforming networks (eg, part of their deforming boundaries) then you’ll need to specify the purple layer containing the topological lines (in the Topological sections of the dynamic polygons or deforming networks layer).

Thanks John for the explanation and the two solutions. That solves it