Hi, I wanted to use Gplates for being able to do what a ytb video say, but when I installed Gplates and then runned it, it gave me a view with horizontal green lines 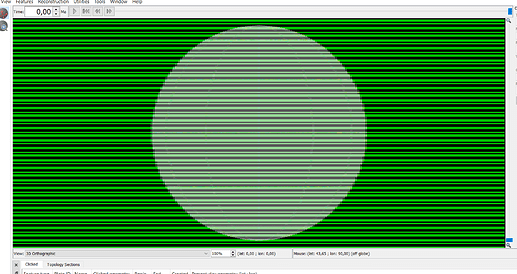 bug-ligne-verte1657×881 62.1 KB
and I have no idea how to fix that, I tried uninstalling it then reinstalling it from the installer I have, but it’s still here, and the first time I’ve runned the program, the command window was saying that it got an error because it was unable to write in a .txt file that wasn’t even there when I checked.
I’m supposing it’s a bug, and it didn’t resolve the bug after restarting my computer.
Drakhe 3 October 2021 18:15 #2

I think I will delete this post in a few days because :
1.) I didn’t got any answer
and 2.) I’m starting to think it might be an issue on my side because I installed gplates on the computer of my mom and it didn’t got the green lines, then I transfered the files of the gplates that was on her computer on my computer then executed the program but I still got those green horizontal bars.
I will experiment a little more about what cause this bug later.

It looks like a graphics driver issue. GPlates uses graphics hardware to render the main window (where your green lines are) and rendering issues like this have occasionally been fixed by updating graphics drivers. If you’re on Windows perhaps try that.