Rifts: from uniform to exponential stretching

If you create a deforming network in GPlates to model a rift and use it to stretch crustal thickness you might notice that the thickness reduces uniformly (equally) across the rift as it stretches, rather than retaining the initial (un-stretched) thickness near the margin and thinning the most near the rift axis.

This is usually because the rift network is insufficiently constrained in its interior - it usually just has points/lines along the margin (and also along the rift axis if ocean crust is forming there). One solution is to manually add more points in the interior region (where the plate ID of each interior point determines its velocity and hence affects the strain rate, which is the spatial gradient of velocity, and hence affects crustal thinning).

Another solution is to enable the exponential stretching in GPlates 2.2. This automatically adds more points to the interior of the deforming network (at run-time; you can see them if you view the network in mesh mode) and distributes the velocities at these points such that the strain rate varies exponentially (along the stretching direction) from the un-stretched side of the rift towards the rift centre.

If you want to play with it then you just need to load up your deforming model and add a ‘rift’ left and right plate ID to any of your deforming networks . It doesn’t matter which plate is left and which is right (ie, you can swap them). The presence of these two plate IDs is what triggers the rift stretching algorithm in GPlates (on a per-network basis).

There are also three other parameters (noted below), in addition to the two plate IDs mentioned, that can be used to control the degree of exponential stretching and how accurately to model the exponential strain rate curve. These parameters can either be set on a deforming network feature or just set in the layer (in GPlates). If they are set in both places then the feature properties override the layer parameters. These parameters can be directly modified to see what effect they have on crustal thicknesses. 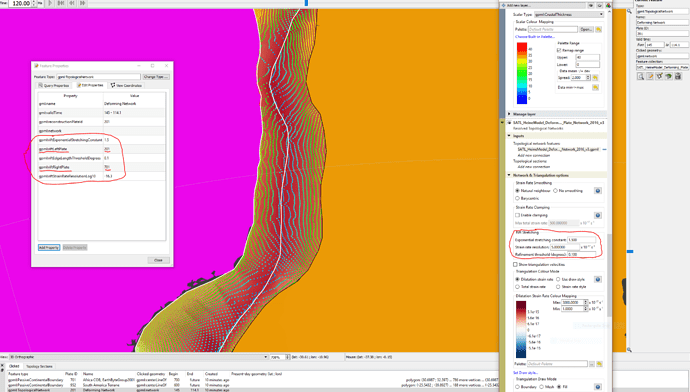 Here are the parameters (all 5 can go in GPML file, and the 3 non-plate-ID parameters can also be set in the layers as a default):