hi all
i hope anyone can help me
i am working with gplates and moving the plates from an interval of 4500Ma till 0, till 1999Ma i am able to move the plates, after not…
any suggein the attached image i show that i am not able to save the moved plate … any idea???

It’s likely that you have no plate circuit path from the plate you’re manipulating (with the Modify Reconstruction Pole tool) to the anchor plate (0) at times older than 1999Ma.

Now there’s a path from 201 all the way to 000 at 430Ma. So once I reloaded the rotation file in GPlates I could move plate 201 at 430Ma (with the Modify Reconstruction Pole tool).

thanks for your suggestion, now i am able to modify position and rotate plates,
i explain you what i am doing so i hope you can help me with other suggestion.
i am working with and interval time from from 4500 Ma to present.
from present to 3400Ma i am able to move some plate that form an hypotetical continent.
now I would like to move the plates that form the continent formed all together but i cannot…could give me an indication??? thanks marco

From 4500-3400Ma you could structure your rotations such that one plate ID represents the continent all formed together (call it root plate R) and then have an individual plate ID for each plate that forms it (eg, A, B, C…). So for 3400-0Ma you’d move the plates A, B, C, etc, as you have been. And for 4500-3400Ma you’d move plate R. That way moving R will also move all descendant/children plates, so you only need to move one plate (R) to make all plates (A, B, C, etc) move. For that to work your rotation file needs to have plates A, B, C, etc, relative to R (ie, their fixed plate should be R, not 0). To see which plates are affected by R (when you move R during 4500-3400Ma) you can check the Highlight children check box. If your plates A, B, C, etc are not highlighted then it means your rotation file hasn’t been structured correctly as mentioned abaove. 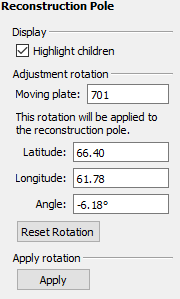 OK
thanks for your seggestion
when i create the plate ID that represents the continent all formed together, which feature must i use??? Other question, if all the black belong to continent A, i call this continent with A???

when i create the plate ID that represents the continent all formed together, which feature must i use???

Are you saying you need a feature with the root plate ID (R) so that you can click on it before you can even use the Modify Reconstruction Pole tool to change the rotation for plate R?

In that case, one of your features should probably be given the root plate ID and then the other plates move relative to that (so whenever you adjust plate R the other plates also move). For example, in the GPlates sample data this would be the Africa (701) plate.

An alternative approach is the following. It’s not the standard approach though, as far as I’m aware (the above paragraph is the usual approach), so I haven’t tried it out. Just mentioning this approach since it might mean you don’t have to change your existing rotations as much. In this approach you could have your plates move relative to plate 0 back to 3400Ma (as you currently do presumably), and then have them move relative to R for 4500-3400Ma (when they’re joined). In the rotation file you’re just changing the fixed plate ID of all plates from 0 to R (keeping the rotations intact). Then you could digitize an outline around the joined plates at 3400Ma and give it plate ID R. In the rotation file you’d start out plate R with a zero rotation at 4500Ma, 3400Ma and 0Ma (so the rotation should remain at zero for 3400-0Ma). Then you’d select the outline feature on the globe at 3400Ma and use the Modify Reconstruction Pole to move it (at times 4500-3400Ma). Then the other plates should move with it (the outline feature is really just a helper feature used to manipulate rotations for plate R). The problem with this approach is there’s now a rotation crossover at 3400Ma (the fixed plate IDs of your non-root plates change from R to 0), so that needs to be synchronised if the position of your joined continent changes. Also it’s not easy to change the position of the joined continent (you’d have to modify the rotations of all your plates, instead of just the root plate). So the approach in the above paragraph is better in many regards.

Other question, if all the black belong to continent A, i call this continent with A???

I’m not sure what you mean?

i was able to resolve the problem, ok
another question, as i finish to work with gplates i save the project, but when i re open the project and play the animation, all the plates i moved before dont move…
why??? i had to do something before save?