Lines of the polygon do not following the Earth curvature

I was drawing a polygon on the surface of the Earth and I noted that the lines are not following the Earth curvature.
In the image I attached, the southern points of the polygon have almost the same latitude, but the lines connecting them are straight, not curving as the latitude graticules.
It seems the polygon is not on the surface of the Earth, but the lines are connecting the points passing through the Earth.
This can be a bug, and would interferes in several analysis in GPlates. 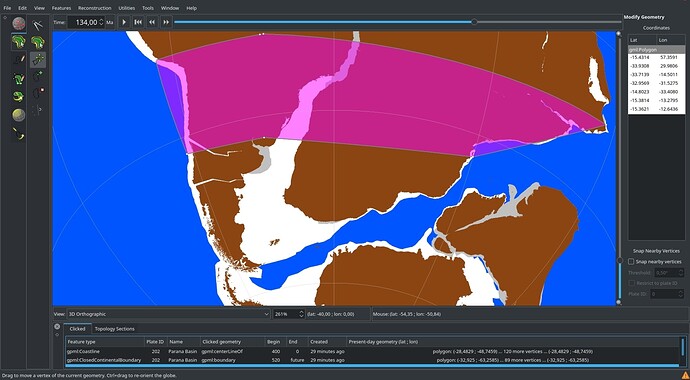 but the lines connecting them are straight, not curving as the latitude graticules

That’s because the lines are great circle arcs whereas the latitude graticules are small circles. Both follow the Earth’s curved surface but a great circle arc is shortest path between two points (along curved surface) whereas a small circle arc is not (instead representing equidistance to the pole). In your screenshot the line segments do look like actual straight lines that cut through the Earth surface but if you zoom out and move them to the horizon you’ll see they’re actually curves.

I understood.
Would there be a way to create a shape that are a latitudinal belt, like a graticules, so a small circle?
I am doing this to see certain points or outcrops are under a paleo latitudinal belt in a given reconstructed time.

Suggestion: Maybe it would be good to add the option to choose if a segment will be great circle or small circles.

Thank you very much for the attention.

You can use the Small Circle tool. They are features that are reconstructed through time so you could give it a plate ID of zero to keep it stationary at the South Pole.

@BernardoPeixoto - in addition to @john.cannon’s suggestion on using the small circle tool, you can find a simple Python script which generates a reconstructable graticule (in GPML format) here. The script allows you to generate global or regional graticules.

Thank you guys!
This tool is exactly what I’ve searching for.