good moorning gplates forum,
i am able to move plate and reconstruct hypothetical continents, then I put a mesh grid into the project, from this point how can visualize the arrows indicating velocity direction???
thanks for the help
marco

Have a look at tutorial 5.3 Velocity Fields for visualizing mesh velocities with dynamic polygons.

In your case you might be using static polygons for your continents, so you’ll also need to connect up your continent (green) layer to the velocity layer. In the following I created a lat/lon mesh (Features > Generate Velocity Domain Points > Latitude Longitude ...) and connected it to the polygon coastlines… 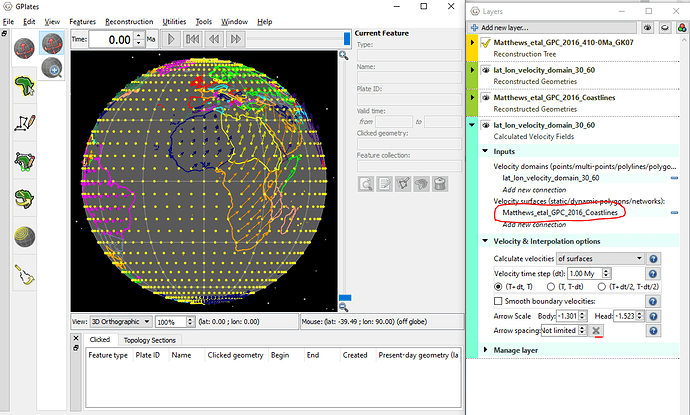 ok thanks for your tips…so in the red circle there is the the velocity surface that corresponds to the plates that I am moving?

Yes, that’s right. For the above example it’s the coastline polygons that are moving (and connected), and so the velocity arrows only appear at points inside these polygons. 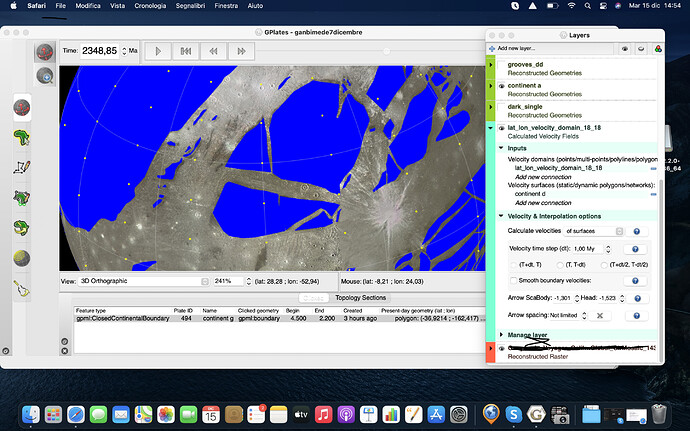 what is wrong now??? why arrows don’t appear now?

it seems to be missing something…anyone can help me with tips??

hi sabin
thanks for your suggestion, according to you in the velocity domain layer, I sound add also the file rotation???

He just means make sure you have your rotation file loaded into GPlates (as in you should have a yellow layer somewhere). But don’t connect that yellow layer to the light blue layer (well, you can’t anyway, GPlates won’t let you).

hi john i did not connect the yellow layer to the light blue,
these are the screenshots of my work on gplate,
the 9.mesh.9 refers to a mesh grid on a zone where i have the dark blue plates, that i am moving.
could you tell me where is the error??? 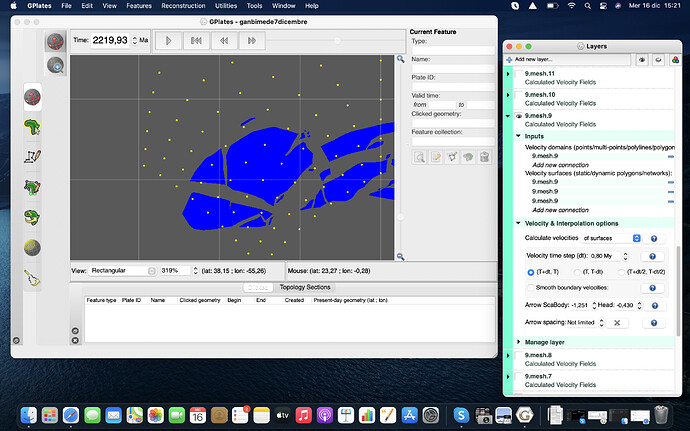 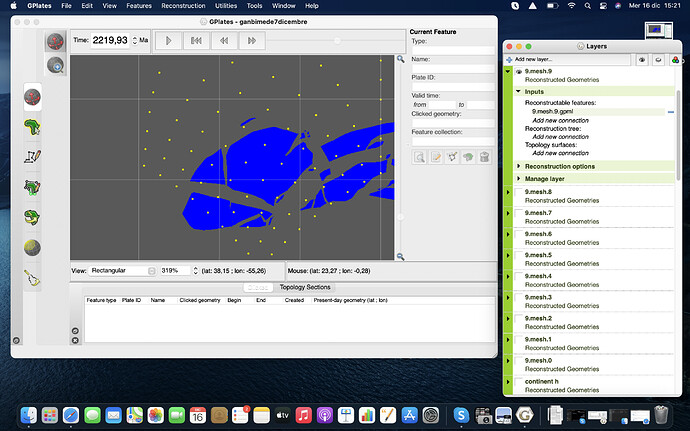 I cannot see a yellow Rotation layer in your Layers window. Even if you have a Rotation layer, your blocks need to have motion for GPlates to be able to extract velocities. In addition, those continent polygons need to be connected to the mesh geometries. I recommend you go through all of the GPlates tutorials to get more familiar with how it all works, and make sure you try this on an existing model in the Sample Data to get a sense of how it works together.

It’s hard to tell exactly what’s going on from your description. You can email/share a zip of the files you’re working with me on sabin.zahirovic@sydney.edu.au. Of course, I will not use them (other than to debug your problem) or share them with anyone else. If you are willing to do that, create a self-contained folder and include a GPROJ file inside that folder.

ok mail to you and send a zip file

Thanks for sending the files through. I initially had trouble unzipping your file on macOS, but Keka managed to unzip the files. Also, the GPROJ file did not work as it was referencing a lot of files on your own system.

Anyway, I had a close look, and the problem arises because of two reasons:

I have sent you a screen capture of instructions on how to rectify this - but it mostly involves turning your polylines into polygons, most likely using some sort of GIS package. Hope that helps!