I have another question regarding deforming meshes: GPlates gives the option to include an initial crustal thickness which is then deformed according to the strain field. Is it also possible to assign a final crustal thickness that is then retrodeformed back in time? Global crustal thicknesses are relatively well constrained in the present-day whereas they can be rather unconstrained for the geologic past for strongly deformed regions…

I realise this is perhaps the same question as I asked before. In principle present-day crustal thickness can be loaded as a numerical raster and the individual points then retrodeforming using the two Python modules, but since initial crustal thickness is something built-in to GPlates I was wondering if this would be built-in as well.

One way to create a file containing present-day crustal thickness that could be used within GPlates would be via some python code (fairly sure this is not possible within GPlates itself).

Suppose you have three arrays (numpy or python lists), containing the longitude, latitude and crustal thickness at some arbitrary points. These could be used to create a gpml ‘scalar coverage’ like this:

If you save this feature collection to a file, you can then load it into GPlates together with a deforming model (presumably one with meshes that overlap to some degree with the point locations), then set the point layer to ‘reconstruct by topologies’. Now the thickness values should change with reconstruction time, but with these changes computed with respect to their present-day values.

Incidentally, to get the crustal thickness values in the first place, a fairly convenient way would be to use the litho1.0 model via this python module: 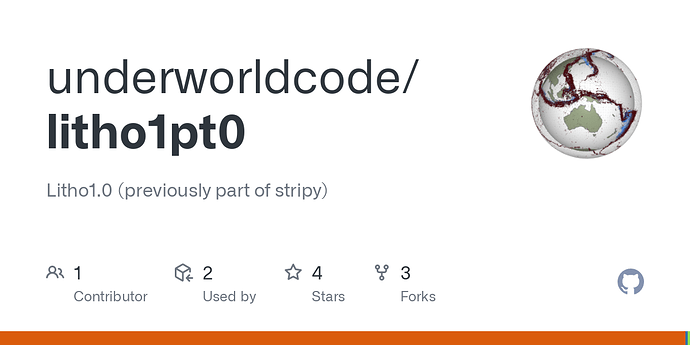 Litho1.0 (previously part of stripy). Contribute to underworldcode/litho1pt0 development by creating an account on GitHub.

What Simon suggests is the way to go (creating your own GPML of present day crustal thicknesses using pyGPlates and then loading into GPlates to retro-deform back in time).

In the future GPlates will be able to load initial crustal thicknesses from a raster (currently it’s just a single flat thickness).

Thank you so much Simon! I will have a look into it!